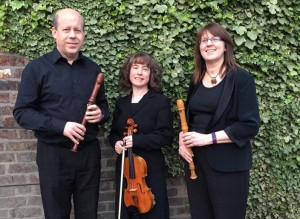 David has a degree in music and maths, studying trumpet under Peter Reeve (English Chamber Orchestra, PJBE) and Stuart Roebuck (Hallé).  After leaving university, he accidentally met up with former music course members who played the recorder, and formed the X-tet recorder ensemble largely as a social activity.  Growing out of this association, David found himself teaching at the Stockport Recorder College, a principle of the Manchester Recorder Orchestra, and many years on is now one of two conductors of this orchestra.  Along the way, encouraged by Karen, he took up the ’cello and is a regular member of Sale Chamber Orchestra.  More recently, David has been approached to conduct the vocal ensemble Capriccio, and is currently preparing them for their fourth concert together.
For the day job, David works for a global pharmaceutical company in their corporate audit function.  He enjoys collecting classic synthesisers and other related musical technology, and may one day connect them all up and make some serious music with them.
_________________________________________________

Like most people, Karen played the recorder at school, but it was only when she moved to Manchester in the late 1980s that she met David and became seriously involved in the local recorder playing world. She is a volunteer tutor at Stockport Recorder College, plays in local recorder ensembles The Barrowmead Ensemble and X-tet and is Principal Descant in the Manchester Recorder Orchestra.

She has also played the violin since a young age and (as if things weren’t already busy enough!) decided in 2010 to take up the oboe. She plays with Amaretti Chamber Orchestra, Cheshire Sinfonia, Alderley Edge Orchestra and Macclesfield Light Orchestra and leads the recently formed Grove Baroque.

Her day job is in a Manchester Sixth Form College and if there is any spare time left over she enjoys yoga and dog-walking.

In addition to a wide variety of freelance performance work, Jac regularly plays with the new and exciting professional Rep. Orchestra. Sometimes she can be found playing ceili music with Jiggity Pig Ceili Band but more usually she is enjoying chamber music with Chordiale String Quartet and Duo Nuovo. When she decided to go back to University, over a decade ago, to study contemporary music and composition, she was fortunate to be accepted as a pupil by Nina Martin and to receive coaching from her husband the late, great Peter Cropper. More recently Jac is grateful to Richard Howarth for his inspirational teaching and for generously sharing his great wisdom about the weird and wonderful job of being an orchestra leader.

Jac divides her time between teaching, performing and composing and when she gets the chance she loves to go dancing.

Sorry, no Tweets were found.