After the concert Slava sent us this message.
“Thank you all so much for a wonderful performance. Hope you’ve enjoyed it as much as I did.” 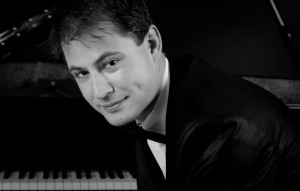 Recently described by Robert Beale for the Manchester Evening News as “a young pianist set to make a major impact”, Slava Sidorenko began his musical education at the age of five in Kharkov, Ukraine. In 2003 he was awarded an Associated Board (ABRSM) full scholarship to study with Norma Fisher at the Royal Northern College of Music, where he won many major awards including the coveted RNCM Gold Medal. His studies continued until 2010 on the first RNCM International Artist Diploma Course with the generous support of the Royal Northern College of Music, the Musicians Benevolent Fund’s MBF Music Education Award, the Philharmonia Orchestra Martin Musical Scholarship Fund, The Worshipful Company of Musicians and The Boise Foundation.

Slava has appeared as recital and concerto soloist in the Ukraine, Germany, Italy, France and many parts of the UK. He made his debut in 2009 at the Wigmore Hall, as winner of the Jacques Samuel Intercollegiate Piano Competition, (the CD “Live at Wigmore Hall” was released the following year), receiving glowing reviews and at the Bridgewater Hall. He performed with major orchestras including City of Birmingham Symphony Orchestra, London Symphony Orchestra, Manchester Camerata chamber orchestra. He was recently appointed as RNCM Ambassador.