Lily Whitehurst is a violinist from Tenby, Pembrokeshire. She is currently studying at the Royal Northern College of Music with Yossi Zivoni with support from the Arts Council of Wales and the Laurin and Arthur Glaze Trust. 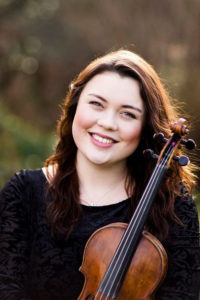 She has played with orchestras such as the BBC Philharmonic Orchestra, The Halle, Manchester Camerata, English National Ballet, Northern Chamber Orchestra and Sinfonia Cymru. She was principal second violin in the National Youth Orchestra of Great Britain and leads many of the RNCM’s orchestras and ensembles. Most recently, Lily lead the RNCM Symphony Orchestra in a joint project with Paris Conservatoire.

She is a member of the award winning Gaskell String Quartet who received first place in the RNCM Schubert Prize and Hirsch Prize for the performance of Beethoven. They recently made their Radio 3 debut with a performance of Errollyn Wallen’s ‘All the Blues I See’. Lily also plays with a variety of other ensembles and has enjoyed working with artists such as Akram Khan, Bryn Terfell and Sting.

As a soloist Lily is the winner of the Cowen Violin Prize, Phillip Newman Violin Prize, Dyfed Young Musician of the Year and the Bulgin Medal awarded by the Worshipful Society of Musicians. She has performed in master classes with some of the world’s leading violinists such as Christian Tetslaff, Renaud Capucon and Alina Ibragimova. Lily’s playing has been broadcast on BBC Songs of Praise, S4C, BBC Radio Foyle and as soloist with the BBC National Orchestra of Wales on Radio Wales. Last summer she enjoyed giving her recital debut at St Martin in the Fields.

She is currently playing on a 17th century Gagliano kindly on loan from Mr Gordon Levy.