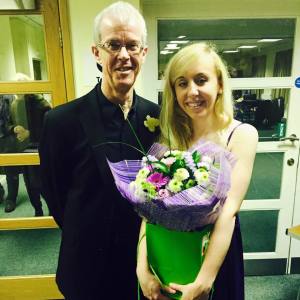 Charlotte began learning the violin at the age of 5 with Mary Howells and at the age of 13 she began lessons with Mike Seal of the CBSO. In 2008 Charlotte gained a place at Chethams School of Music in Manchester, where she studied violin under Eyal Kless and Benedict Holland. During this time Charlotte, along with her quartet, was invited to perform in London’s Wigmore Hall and the prestigious Royal Northern College of Music Chamber Music Festival. The quartet also performed on BBC radio 3 as part of the ‘In Tune’ concert series. Following this, Charlotte was awarded the school’s Mozart Scholarship for her outstanding chamber music work as well as winning the Dewhurst and Torevell prize.

In 2010 Charlotte was appointed as leader of the CBSO youth orchestra after playing with them for 3 years. With them she has worked under conductors such as Andris Nelsons, Edward Gardner, Andrew Litton and Jac Van Steen as well as working with soloists such as Leon McCawley, Chloe Hanslip and Jean-Efflam Bavouzet.

In 2011 Charlotte accepted a place at the Royal Northern College of Music to study violin with Benedict Holland and Alexander Sitkovetsky. In 2014 Charlotte was the winner of the college’s Norman George Scholarship.

Amongst her many solo performances she has performed all 10 Beethoven Sonatas back to back in a 5 hour recital in order to raise money for the St John’s Church in Bromsgrove ‘Landmark 2 Appeal’. Recently she has performed Mozart Sinfonia Concertante with the South Cheshire Orchestra, Vivaldi Four Seasons with the Orchestra of St.John, Sinfonia of Birmingham and Orchestra da Camera, Mendelssohn violin concerto with the Walsall Symphony Orchestra and Coventry Youth Orchestra as well as Tchaikovsky violin concerto with the Westmorland Symphony Orchestra, Orchestra of St.John and the CBSO Youth Orchestra in their concerto afternoon.

Charlotte is a member of the Virr String Quartet who were recent winners of the RNCM Nossek prize and finalists in the RNCM Schubert Prize and Hirsch prize. Following this they were invited to perform in a public masterclass with Frans Helmerson and a public workshop with Peter Maxwell-Davies. The quartet have also recorded popular arrangements of classical works in London under the Warner Bros. record label. They receive regular coaching from world renowned musicians such as Petr Prause, Levon Chilingirian, Frans Helmerson and Alexander Sitkovetsky.