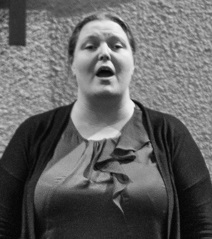 Claire has a long association with Sale Chamber Orchestra, starting to play with us while a violin student of our former leader, Esther Laing. She went on to Trinity College where she studied singing under Wendy Eathorne, graduating in 2002. Opera credits include Baba in Menotti’s “The Medium” and the title role in Bizet’s “Carmen”. She also performs in musicals, recently taking the role of Aunt Em in “The Wizard of Oz”. Claire is involved with local church choirs and is Junior Choir Director at St Martins Church. In her spare time Claire is active in scouting and has worked as vocal coach for Sale Gang Show and also does some private vocal teaching. Claire rejoined SCO as a violinist and in this concert appeared as both singer and string player!