On 19th November 2016 the orchestra performed ‘Dunham Dances’ and ‘For Valour’ by local respected composer and friend of the orchestra Martin Ellerby. Martin attended the concert and had this to say afterwards…

“To Richard and all members of Sale Chamber Orchestra including Minim Mouse – many congratulations on a very entertaining concert in St Paul’s Church last Saturday! Personal thanks for giving the premiere of my ‘For Valour’ and also programming my Dunham Dances. I greatly appreciate all the hard work you all put into capturing the character and essence of both scores. All best wishes for your future events.” 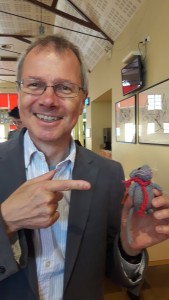 Martin Ellerby lives in Altrincham. He studied composition with Joseph Horovitz at the Royal College of Music and later privately with Wilfred Josephs. He has written in most forms including 6 symphonies and several concertos. He has also written much chamber and choral music alongside repertoire for concert band and string orchestra. His music has been performed, broadcast and recorded all over the world by leading performing ensembles at prestigious venues including two BBC Proms concerts at the Royal Albert Hall. For 7 years he was the civilian composer-in-residence to the Regimental Band of Her Majesty’s Coldstream Guards composing much music for specific State and Royal events.

Sorry, no Tweets were found.