In June 2015 Lucy Arch joined us to perform the Haydn Cello Concerto in D major.

“Thank you all so much for having me and for being so friendly and welcoming! I absolutely had the best time playing with you all.” Lucy Arch 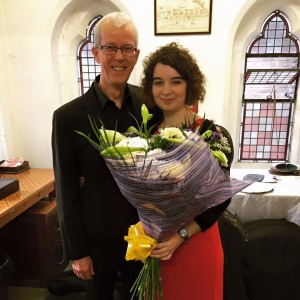 Lucy Arch started playing the cello aged 7 and studies at the Royal Northern College of Music with Christopher Hoyle and Hannah Roberts. She played for several years in the National Youth Orchestra of Great Britain, performing at major venues all over the UK under eminent conductors. Lucy has a keen interest in chamber music, twice winning the ensemble prize at Junior RNCM, and performing the Schumann Piano Quartet at the Wigmore Hall. Her string quartet, The Clara String Quartet, have this year won the Hirsch Prize, John Barbirolli String Quartet prize, and Laurance Davies String Quartet Prize. They have just returned from a course in Germany where they represented the RNCM, and will be performing at the Wigmore Hall in 2015. Solo performances have included the Schumann concerto at the RNCM, and several recitals. Lucy is an experienced orchestral player, leading a wide range of the classical,romantic and 20th century repertoire with RNCM chamber, symphony and classical orchestras, as well as many others. She was the youngest person ever to be accepted onto a scheme with the Liverpool Philharmonic Orchestra and this year will complete a similar scheme with the BBC Philharmonic.

Lucy has just passed her degree at RNCM with a first and been offered a trial with one of the major orchestras.